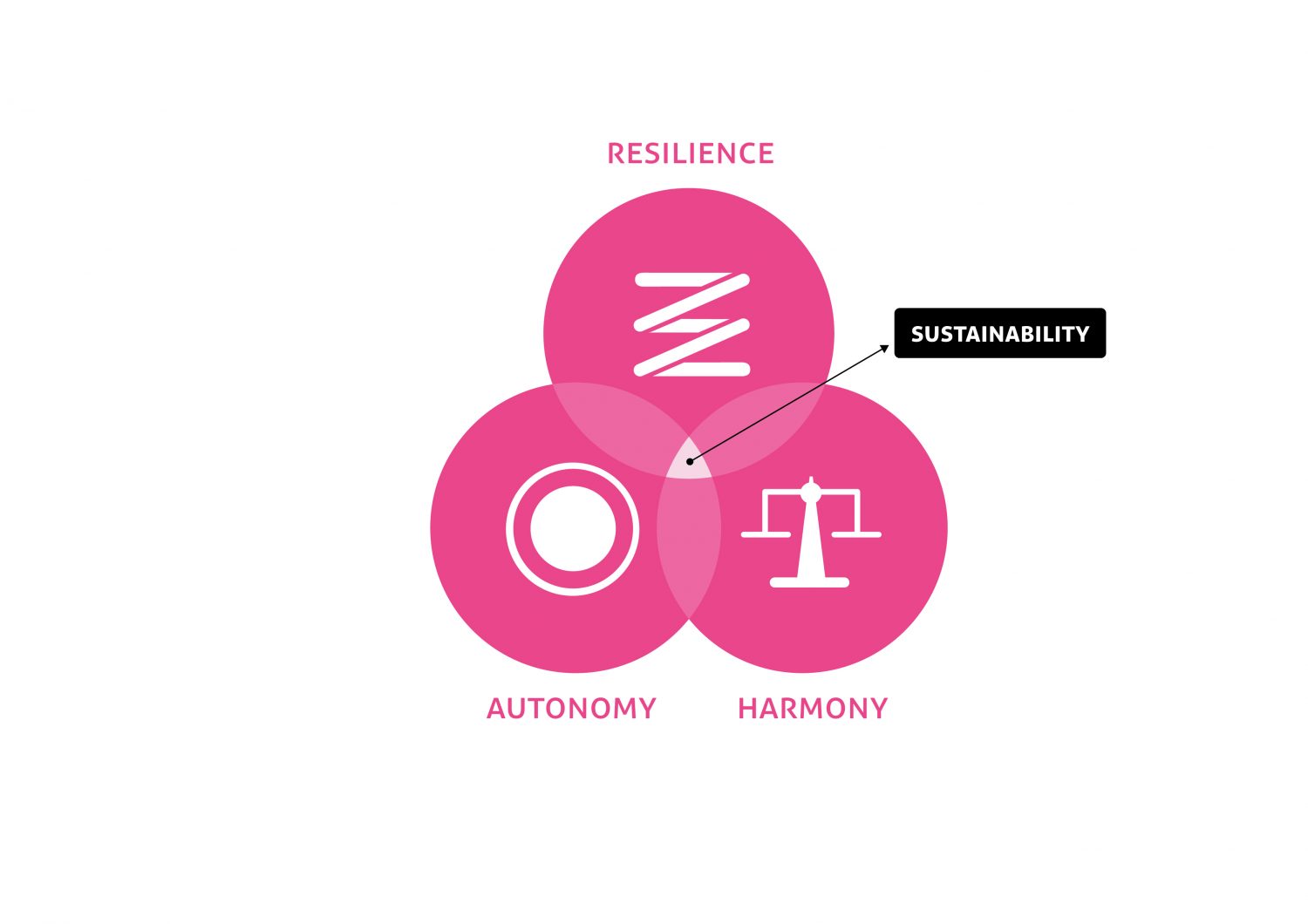 As a standard, and derived from the SiD sustainability definition, we use ERA, short for Equity, Autonomy and Resilience. The three system indicators are ‘fed’ by the network as well as the object indicators below, and also respond directly to one another. In each complex system, the relationships between the network indicators, the object indicators and the three system indicators among each other are different. Therefore, as with the network indicators, it’s not possible to determine universal rules for measuring the ERA indicator performance. For each project, these relationships should be mapped, and based on this, an evaluation can be made on various levels of detail and depth.

Resilience is a system’s capacity to withstand (unexpected) disturbances and its ability to return to a healthy state after suffering a blow (not necessarily the same state as before).

Resilience is not to be confused with toughness or strength. For example, for purposes of personal self-defence, techniques which rely on agility and flexibility such as Aikido are more effective than those which rely on pure strength, such as body-building. The same goes for systems: agile, flexible and adaptive systems are more likely to be able to return to a sustainable state than monolithic and tough systems.

The concept of resilience as a goal for society is a lesson that will provide insight in many circumstances in life. After all, resilience is key for ensuring continuity in the long run. By focusing on resilience, one comes to insight that goals such as Growth and Profit lead down fragile pathways which, in the end, serve none. Placing Resilience at the topmost level of decision making leads to profound improvements in system performance for all stakeholders, creates clarity where there previously was none, and in the end should be considered a goal in and of itself.

Resilience is a complex system indicator, just like the other system indictors, and is influenced by a wide variety of network and object parameters, which change depending on the circumstance. Resilience is highly susceptible to systems dynamics, often more so than Autonomy and Equity.

Autonomy, or self-reliance, is the level of independence of the system from other systems on any level, including material resources, decision making, trade balances, etc.

All systems are dependent on others to some level, which is not necessarily a bad thing, and it’s rarely worthwhile to maximize autonomy. However, for vital resource flows, network functions and system behavior reaching a high level of autonomy increases sustainability of the system.

Autonomy is very reliant on the physical world around us, resource availability and the unequal distribution of resources on our planet. By investigating autonomy, we will automatically discover local strengths and context specific solutions to universal demands, which leads us to closed resource loops and cycles, reducing waste and increasing the recognition of value that lies within everything around us.

What we learn from Autonomy is the necessity to discern between critical resources and those of want or luxury. For critical resources, such as food, shelter, clean water, and power, we best keep them close, decentralized, and adapted to our local conditions. Doing so will increase resilience and the ability for these needs to be provided in a context sensitive manner minimizing externalizations such as pollution and injustice. For luxury items, or those that are non-critical or rarely used, we may pool resources on larger scales to make their provision more efficient, as well as closing resource cycles on a global scale.

Autonomy is the system parameter most directly influenced by the object parameters. Resource cycles affect an area or system greatly on its ability to be autonomous. Decision making structures are another important factor in autonomy, and the balance of interchange between neighboring systems.

Per resource, the scale of a balanced autonomy is different. For instance, it’s perfectly feasible for small villages to capture and clean their own water, and valuable to do so. It increases their resilience. However, the same does not apply to a car factory. Not every village needs their own, even though they do need cars (it could use a garage though). Autonomy needs to be balanced. This can be done by by determining the criticality of the resource as well as its frequency of use and its cost of provision. Usually it’s best to err on the side of autonomy for highly critical resources.

The same goes for policy decisions. Some types of decisions are best done on a centralized level such as the European Union or the United Nations, for decisions that are universal and are okay to be very slow to change. These are likely to be few, but critical, such as the universal declaration of human rights. Local laws and conditions are usually best to decentralize as much as possible to increase speed and decrease overhead.

Harmony, or social justice, is all about fairness: to each other, to future generations as well as to all other living things. Harmony is a measure of tension inside of the system, when it is low, there’s a chance for internal collapse through revolution or strife. Harmony touches on the fundamentals of human interaction, and provides the base motivation and conditions for people to want to be part of a system, to make it successful, and thrive in it. In evaluating Harmony, basic human rights come first, which is still a challenge in any global supply chain in the world today. For more complex social and interpersonal evaluations of Harmony, we can use areas of study such as ethics to help, including deontology and consequentialism.

History shows us that humanity has the capacity to be unimaginably cruel, both to itself and to other living creatures. We need to protect ourselves from our own dark side. This is what many governmental systems aim to do, to optimize our best behavior, while preventing our worst. Just as with Autonomy, Harmony seeks a state where there’s a healthy playing field to achieve this.  Balancing power, and finding equitable mechanisms to steer clear of the atrocities that continue to plague our collective actions is a primary cause for any system hoping to be sustainable. After all, one can have a resilient, autonomous system built on the back of slaves, only serving to propagate suffering of many to benefit few.

In a world that is increasingly trying to be transparent, we may hope to move towards a world with greater social justice and harmony. Yet, some of this trans- parency also exposes much wrongdoing not seen before. Harmony is primarily fed by the top layers of ELSI, such as cultural rules, laws, economic balances, and the health and happiness of those that are inhabiting the system. Mixed in that are network parameters that help the system to increase its equity, but do not necessarily cause it to be equitable, such as awareness, transparency, and validity. Increasing these network parameters through law or policy will likely lead to increased harmony in the long run.